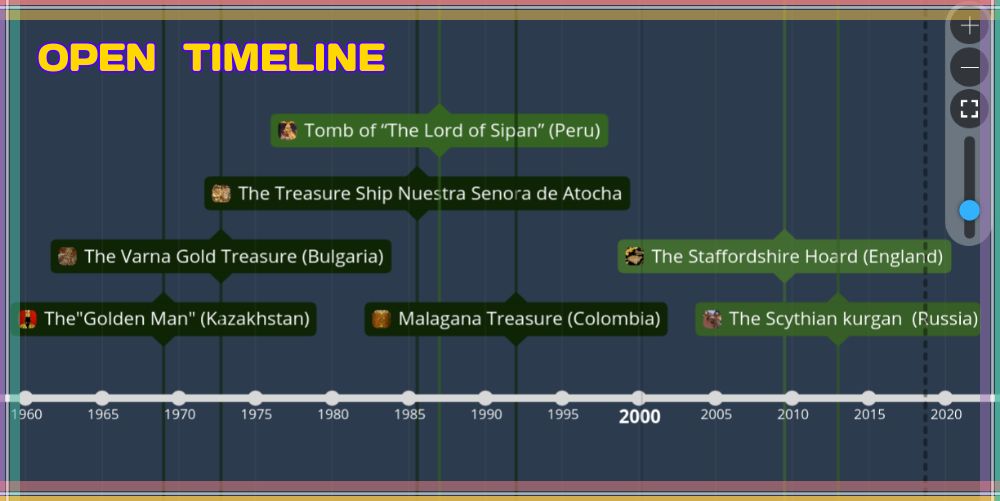 The treasure was found in the 1970s, by tree bulgarian archaeologists when they stumbled upon a vast Copper Age necropolis from the 5th millennium BC (4,600 - 4,200 BC) containing the oldest golden artifacts ever discovered near the city of Varna, Bulgaria.

294 graves have been found in that necropolis, many containing sophisticated examples of metallurgy (gold and copper), pottery (about 600 pieces, including gold-painted ones), high-quality flint and obsidian blades, beads, and shells. There are crouched and straight inhumations. Some graves do not contain a skeleton, but grave gifts (cenotaphs). These symbolic (empty) graves are the richest in gold artifacts. Three thousand gold artifacts were found, with a weight of approximately six kilograms. Grave 43 contained more gold than has been found in the entire rest of the world for that epoch. Three symbolic graves contained masks of unbaked clay.

In 1808, William Cunnington, one of Britain's earliest professional archaeologists, discovered what has become known as the crown jewels of the "King of Stonehenge". They were found within a large Bronze Age burial mound just half mile from Stonehenge, known today as Bush Barrow, part from Normanton Down barrow cemetery. Within the 4,000-year-old barrow, Cunnington found a male skeleton with a collection of funerary goods that make it "the richest and most significant example of a Bronze Age burial monument not only in the Normanton Group or in association with Stonehenge, but arguably in the whole of Britain". The items date the burial to the early Bronze Age, 1900-1700 BC, and include a large 'lozenge'-shaped sheet of gold, a sheet gold belt plate, three bronze daggers, a bronze axe, a stone macehead and bronze rivets.

The Mask of Agamemnon is a Mycenaean funerary gold mask. Found in Tomb V in Royal circle A at the Acropolis of Mycenae by the German archaeologist Heinrich Schliemann who believed it to belong to the Homeric hero Agamemnon.
The mask is made of gold and is a funeral mask found over the face of a dead body in a burial place at Mycenae. Schliemann thought that the body and the mask are of the legendary King Agamemnon.

In 1876, Schliemann began excavating at Mycenae on behalf of the Greek Archaeological Society. Schliemann’s workmen would soon uncover stelae marking the boundary of a grave circle about 27.5 meters (90 feet) across. It contained five late Bronze Age shaft graves. Schliemann’s excavation of the shaft graves revealed that they contained the remains of several Mycenaean chiefs, five of whom wore gold face masks.
The controversy and the doubt of authenticity over this mask remains till today. This golden exhibit is currently on display at the National Archaeological Museum in Athens. In spite of all the doubts, this distinguished mask of gold which is about 12 inches in height is still known as the Mask of Agamemnon and is one of the most prized discoveries from the ancient Mycenaean ages.

The hoard is dated to the 11th century BC; Excavated in an area to the north-east of Berlin, Germany in 1913

The Eberswalde Hoard or Treasure of Eberswalde (German: Schatz von Eberswalde or Goldfund von Eberswalde) is a Bronze Age hoard of 81 gold objects with a total weight of 2.6 kg. The treasure is trove that was unearthed during an excavation in an area to the north-east of Berlin, Germany in 1913. It is a largest prehistoric assembly of gold objects ever found in Germany, and is considered to be one of the most important finds from the Central European Bronze Age. It is believed that they are from either the 11th or 10th century BC. Today, it is in Russia, as part of the group of artifacts and works of art looted from Germany at the end of the Second World War.
The hoard had been deposited in a globular vessel with a lid. In it were eight gold bowls, which contained another 73 gold objects. The bowls were thin-walled chased gold vessels with copious ornamental decoration. The other objects included neck rings, bracelets and 60 wire arm spirals. 55 double spirals were tied into bundles. A gold ingot, a piece of metal shaped like a crucible and two smaller pieces probably represent raw material for the production of such objects. The Eberswalde treasure is believed to belong to the goldsmith known as Villena-type, originating in the Iberian Peninsula, for its resemblance to the Treasure of Villena. The treasure currently resides in Russia and Germany is attempting to reclaim it.

The Treasure of Villena - Spain

The Treasure of Villena (known as El Tesoro de Villena) is one of the greatest hoard finds of gold of the European Bronze Age.
The hoard was found on 1 December 1963 by archaeologist José María Soler 5 km from Villena, and since then has been the main attraction of Villena's Archaeological Museum.
It comprises 59 objects made of gold, silver, iron and amber with a total weight of 9,754 kg, 9 of them of 23.5 karat gold. This makes it the most important find of prehistoric gold in the Iberian Peninsula and second in Europe, just behind that from the Royal Graves in Mycenae, Greece.
The iron pieces are the oldest found in the Iberian Peninsula and correspond to a stage in which iron was considered to be a precious metal, and so was hoarded. The archaeologists estimate the date of this trove at c. 1000 BC.

A priceless treasury trove has been uncovered by archaeologists in the remote Tarbagatai Mountains in Northeastern Kazakhstan
The site was first excavated in 2016, but there was also some digging at the site in the 18 th century in the reign of Tsar Peter the Great.
In total some 3000 golden objects have been recovered. The golden treasure includes plates, and jewelry, including, chains with precious stones and bell-shaped ear-rings. A large number of exquisitely crafted animals have also been found. There have also been a great number of golden beads that were used to decorate the elaborate clothing of the Saka. According to the researchers the jewelry was made using sophisticated techniques, indicating a high level of metal working skills for the period. It is believed that the find dates to 9th century BC.

The treasure was discovered in 1873, in a site rumoured to be the remnants of the great city of Troy – so its discoverer, German archaeologist Heinrich Schliemann, named the find after Troy’s king, Priam.
In 1871, Schliemann began excavating the site of Hisarlik (north-western), Turkey and on the 31 st of May 1873, while digging near a great gateway, at the foot of the wall was found a "large copper article of the most remarkable form...with gold glimmering beneath it." After a lunch break, Schliemann "cut out the treasure with a large knife." Schliemann called his find the Priam's Treasure after Priam, the king of Troy during the decade-long siege
The unearthed Priam’s Treasure was a large collection (9,000 items) of precious metal jewelry, vases, weapons, and more. This great treasure being found drew scrutiny and questions, and the legitimacy of it was challenged by later archaeological evidence, which held that Schliemann’s claim of it being the King Priam’s Treasure was a misinformed over-step and exaggeration. The reasoning for that being that the treasure discovered was from the time of Troy II, but Priam would have lived in the time of Troy VI or VII.
Today, the Treasure of Priam resides in Russia.

The Golden Man (Zolotoy Chelovek in Russian, Altyn Adam in Kazakh) is a warrior’s costume that was found in 1969 by a team of archaeologists from the Kazakh Institute of History, Ethnography and Archaeology. It is made of more than 4000 separate gold pieces, many of them finely worked with animal motifs, and has a 70 cm-high headdress bearing skyward-pointing arrows, a pair of snarling snow leopards and a two-headed winged mythical beast. A total of 4,800 gold adornments were found in the kurgan, which is the second highest number ever found in tombs, topped only by that of Tutankhamen. Radiocarbon dating estimated the age of the finds to be from the 5th century BC.
Though the person who wore this costume may have no genetic connection with modern Kazakhs, The Golden Man has become one of the symbols of post-independence Kazakhstan, replicas are found in museums throughout the country and "his" image also adorns the Independence Monument in Almaty and the presidential Standard. While many researchers believe the Golden Man to have been a Saka prince, probably around 18 years old, others speculate that the Golden Man may perhaps have been a woman.